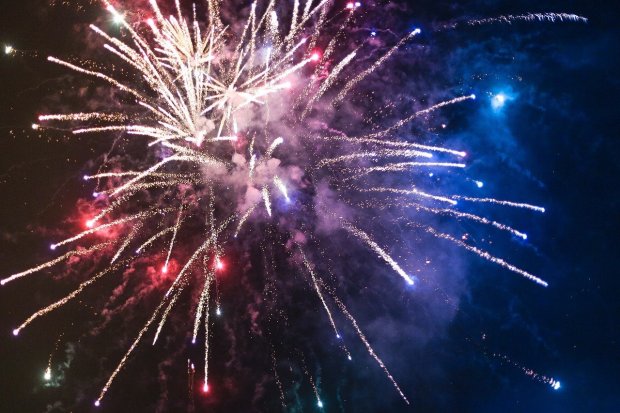 DURING THIS PAST Halloween, I stumbled across a written line somewhere that floored me, and from there I began a deep dive towards explaining it. You’ll never guess what I found out.

Fireworks and fire crackers with Halloween was, and still is, a predominately Vancouver (and over time eventually B.C.) based thing. The family-sanctioned exercise of lighting explosives on Halloween is not practiced anywhere else in the world, at the level it is here.

That left me gobsmacked.

I grew up in Vancouver during the ’70s on the west side, in Kerrisdale.  In my formative years but beyond my younger candy toting experience, Halloween was a night for us hooligan youngsters to prowl the streets of our middle-class neighbourhoods in youth groups described in sizes between ‘a bunch’ and ‘a lot’.

The premise was simple: set off firecrackers and fireworks to our hearts content.

Others, as the next day’s news portrayed, got themselves into more trouble; garbage cans may have been kicked over, our school outdoor properties were trespassed, minor vandalism occurred and reports of neighbouring group clashes … OK, fights … or call them what they were … rumbles … made their way through school hallways the next day.

Stories of my involvement in such events are grossly exaggerated … cough.

The remembered reality of such reports of potential violence were rarely actually even fisticuffs, in reality more group-on-group chest pounding, insulting bravado, words said … all which after a while got boring … we had firecrackers to blow up old lady Smith’s pumpkin with, so we would go our separate ways peacefully.

It seemed that this was one night of the year, that was left to the youth of the city to own their space, stretch their legs and practice territorial stewardship.  A coming-of-age moment that prepared us for future life challenges.

This was the normal way. I remember buying my first ‘brick’ of Black Cats literally out of a student’s locker, in a hallway at high school.  Imagine getting caught for that these days.

A thousand overturned soup cans were blown skywards, tennis balls with holes were stuffed full and destroyed and we searched for more interesting things and experiments to attempt.

We weren’t idiots, there were standing rules:  Do not use a lighter, use a punk for safer control.  Never light one without calling it.  If a guy lit one, or a string, you stepped back a couple paces, depending on the size and strength potentially more than a few paces.

No one ever guilted, bullied or dared a kid into holding it too long and never, ever force a dangerous situation.  Back in those days, it would not even cross our mind to force a situation to the point where unavoidable harm was done.

Now I find out it was mostly a Vancouver thing.  Other kids around the country did not have this experience … wow.  Even around the world, Halloween non-municipal sanctioned fireworks are just not a thing.

So, I dove into the references I could find, to look at this history.

A bit of research revealed that indeed fireworks at Halloween seemed to be a mostly B.C. tradition. In 1965, there was a report about fireworks from Ottawa noting that Canadians let off an estimated 250,000,000 firecrackers (including fireworks) a year.

Most they noted were on Victoria Day, Halloween in B.C. and Guy Fawkes night in Newfoundland. Canada Day fireworks were not yet a thing.  Ottawa specifically pointed out Halloween in B.C., in a firework report.

So why in B.C. are Halloween fireworks so popular? Perhaps various traditions such as the Guy Fawkes night, bonfires and fireworks got combined with the trick-or-treating of Halloween from the States to give us this unique West Coast celebration. It just didn’t spread any further.

In the 1950s, the City of Vancouver and the surrounding municipalities began to hold Halloween parties where contests, dancing and games were followed by some fireworks. The idea seems to be about giving youth something to do in an attempt to control the hooliganism that was a big problem in parts of the city at this time. Interestingly, it seems that Dunbar, Point Grey and Kerrisdale youths were the worst offenders.  Oops … I was apparently a ‘problem’.

Fireworks (as apposed to firecrackers) at Halloween slowly spread. In 1965, Jasper, Alberta hosted a community Halloween fireworks display and in the 1980s there was a rise in community displays across B.C.

Miami got in on the act in the 1990s and Disneyland and Disney World began hosting Halloween firework nights in the early 2000s as does the Navy Pier in Chicago. In Ireland (north and south) fireworks remain part of the season’s festivities while in Britain, loads of communities now host firework displays for Halloween separate from the traditional Guy Fawkes night.

To be clear, these are community sponsored firework events.  In B.C the Halloween fireworks event is a family and neighbourhood private venture.  This appears to be unique.  How it twisted from community sanctioned fireworks events to family controlled is not so clear, but the realities of the law at the time and now, probably fed the observance to become what it is.

Now let’s look at the law.

In Canada today, only Nova Scotia stands alone as a jurisdiction without laws making fireworks illegal.

Canadian law stipulates fireworks can only be used personally on Canada Day and, oddly, Victoria Day.  In other provinces it is specifically illegal, yet many municipalities and provinces have rules regarding family firework use; between sunset and 11 p.m., must be 18 … cough … permits may be required, not permitted on public property and the responsibility to maintain the fire risk with extinguishers.

It’s illegal, but if you buy a permit and follow these rules, it’s OK.

We did neither back in the day, but apparently by the law we didn’t need to … except of course that we were under age and without adult supervision … but I digress.

In 1996, The Province of B.C. enacted the Fireworks Act, outright banning fireworks but application of the law is pursuant to municipal bylaws or rural designation by regulation, that choose to apply the act … which it appears few municipalities in B.C. did.

Interestingly, B.C. law also specifically applies an exception: Fireworks Act Section 3; “Except between Oct. 24 and Nov. 1 in any year, a person must not sell, give, fire or set off fireworks.”

So basically, Halloween fireworks historically have been essentially by the book legal for 25 years, yet any city or regional district in the province is able to create their own prohibition bylaw that overrides this exception.

This year, Vancouver City council did just that, and prohibited the sale and use of fireworks by the general public to ‘reduce property damage and injury’. Those in possession of fireworks or who set them off could face up to $1,000 in fines per offence.  Apparently, depending on where you live down there, this year’s usual cacophony of firework explosions reported the same level as usual years, meaning that the rules just aren’t being followed.

In an odd juxtaposition, the usual fireworks stores sprang up across Vancouver prior to Halloween.  I can’t even begin to explain that one.

So, in the end, all my life I thought everyone in Canada and, likely, the U.S., did as we did back in the ’70s in Kerrisdale; that this was a normal annual event; family and hooligan use of fireworks on Halloween … but it wasn’t true.

I write this 40 years later in Kamloops, as a neighbour down the block is setting off for two hours, what must be a small fortune in fireworks for their own and the neighbour’s amusement, and through my open window I can clearly hear other instances of firecrackers and fireworks from every direction, and I even saw a group of ‘youds’ walk down the middle of our side street … owning their territory.

They may have even tipped over a garbage can … the hooligans … good on ‘em.

All was right with my world.

The rest of the planet? The don’t even know what they are missing out on.

3 Comments on JOHNSON – Halloween fireworks and hooliganism – only in B.C.