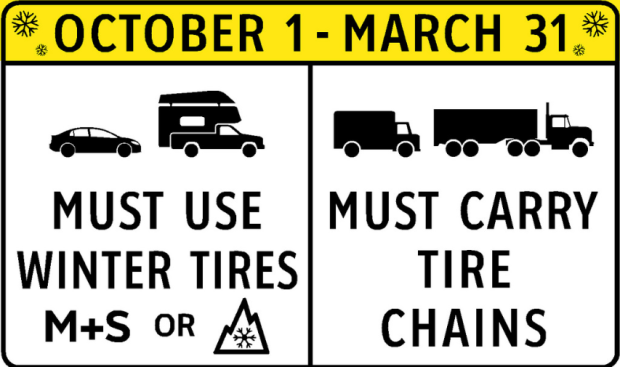 AS OF OCT. 1, snow tires are required on B.C. highways.

That includes two rated levels of tires, the mountain/snowflake symbol rated tire and the M+S (Mud and Snow) rated tire.

Either way the tire tread must have 3.5mm of depth and even though the B.C. Ministry of Transportation and Infrastructure recommendations suggest four winter tires that are evenly matched in tread type and depth, the law requires you must have at least two matching winter tires on the primary drive axle, even when driving a 4X4 vehicle.

From there, the province allows what they call alternate traction devices; steel link chains, cable chains and studded tires.  Regulations actually say that if you use studded tires, you ‘should’ have them on all four wheels for even traction as a recommendation, but if they are used on front wheels drives, they MUST be used on the back of the vehicle as well.

The province also reminds to check your tire pressures during the winter, as tire pressure will decrease as temperature drops.

Failure to adhere to these rules can get you a $121 roadside fine under Section 125 of the Motor Vehicle Act, courtesy of the RCMP, CVSE (Commercial Vehicle Safety and Enforcement) or other policing agencies (even railroad police), and they can also make you turn around.

At home here, we have two cars; one small SUV, one large SUV, and both run four studded tires in the winter and for the most part we tend to stick around town, and bypass visits to family in Vancouver completely during the snow season, and limit other family visits to the Okanagan.

As a long-time work driver in the north, I have seen more than anyone’s share of winter conditions on forestry service roads and open highways, and these days we just choose to spend less time on winter highways … but we still have the tires.

After 2020’s winter driving snowmageddon, the Attorney General considered making winter tires mandatory across B.C., finally including the Lower Mainland and Southern Vancouver Island, after a spike of more than 18,000 dial-a-claim calls to ICBC.  The province has not appeared to have followed up on that threat.

When the above rules were initially announced, they allowed only the mountain/snowflake level of winter tire, but under a pretty heavy backlash by 4×4 and pickup truck drivers in the province, the Transportation Ministry buckled and allowed M+S tires as well.

This created an odd, grey area around the allowance for M+S tires.

Here we are a number of years later, and the rules are the same.

Studies have clearly shown M+S tires are not as capable of operating on ice as they lose the ability to grip below -7 degrees Celsius, a common winter temperature in these parts.  Statistics show that there is a difference in accident rates in winter between these two classes of tires.

Both the Transportation Ministry and ICBC are very clear that M+S tires for winter are for ‘occasional use on a limited basis’ and are the lowest common denominator for basic adherence to the regulations.

M+S tires are generally intended to be a recreational driving concept, so users of vehicles like this can go off road, rock climbing and other recreational driving pursuits, because they have a high grip value in warm temperatures, and their wide gap tread designs tend to throw mud and loose snow quite well.

In addition, work vehicles that spend the majority of their life actually working in the back country and on FSR’s do benefit from M+S tires in all but the worst winter conditions, as the ability to eject material from the tire is paramount.

That said, the vast majority of pickup truck and large SUV vehicles are not ever, or are very rarely, used as real off-road recreational vehicles or deep country work vehicles.  Most are only used as daily commuters, family vehicles and general around town work vehicles, spending most if not all of their time on regular city roads and highways.  As well these large vehicles are often used to haul trailers and the like.

People here just like trucks, even if they are rarely or never used to their fullest off-road potential. These users simply do not need M+S tires, but buy them because they are allowed on our highways, summer and winter.  They have become the defacto four-season tire.

This means that the regulations regarding winter tires have failed.  A healthy percentage of vehicles on our winter highways are not riding on tires that are considered safe to do so.

If you buy a truck or larger vehicle that requires truck sized/costed tires, you are buying into the reality that in general your tires will cost a lot more than a passenger car’s.  On top of that, proper mountain/snowflake winter tires will cost even more.  This is just the way it is.

One could argue that if you can not afford to, or don’t want to equip your vehicle with tires that are appropriate for winter … you should either buy a vehicle that doesn’t need them, or park your truck during the winter.

The problem is that rather than recognising the need to use appropriate tires, many buy one set of tires for the year because they can by regulation ‘get away with it’, and if told to either park their truck in the winter … or buy proper winter rated tires, it becomes an affront to their rights.

Car drivers have the same rights, but accept this as normal.   Truck drivers should be seen as equals under the law.  Truck drivers can always choose smaller vehicles, where the cost of tires is more manageable.

The question becomes, why the province is not reconsidering this, and looking at the reality that people have taken advantage of a work-around regarding these regulations?  One wonders why at the time of these regulations, they didn’t add a legislated timeline of two or three years transition for people to naturally switch from M+S to mountain/snowflake for winter use, as they need to replace tires anyway?

That would have been a logical approach to listening and responding to the backlash at the time, and slowly incorporating towards the safest option of requiring real winter tires, giving people the chance to work towards affording them when they needed new tires anyway. If they had, today it would be an accepted norm for these vehicle drivers to just put their stored winter tires on, just like everyone else.

If people need or want to use M+S tires for their intended off-road recreational purpose, then that’s great, but if they want to drive it around all winter, require them to get proper mountain/snowflake tires, like the rest of us on the road, and at the same time catch everyone else that don’t even take their truck off-road … ever.

2 Comments on JOHNSON – Mountain/Snowflake or M&S tires, what are you running?