The heat dome of this past summer was a once-in-1,000-year event but don’t expect another thousand years to pass before the next one, delegates to the Union of B.C. Municipalities were told Wednesday.

A workshop on the effects of climate change on temperatures painted an unsettling picture of what to expect in future.

Chief provincial health officer Dr. Bonnie Henry said heat domes are a regional phenomenon in B.C. and most deaths occurred in the Lower Mainland where very hot summers are usually more rare than in the rest of the province.

She said this year’s prolonged heat wave wouldn’t have been possible without climate change.

That assessment was echoed by Dr. Sarah Henderson, environmental health scientist with the B.C. Centre for Disease control.

Even though it was considered a once-in-1,000 years event, “this could happen again next summer,” she said.

There were deaths in all age groups but most were among those 50 years or older. 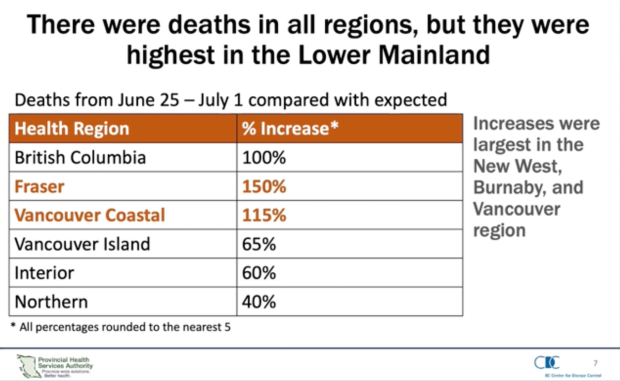 “I really want to emphasize that we saw pretty uniform increases over what was expected for all these age groups.”

A lot of deaths occurred in private residences without air conditioning because indoor temperatures could hit 40 degrees and not go down much at night, Henderson said.

Meteorologist Johanna Wagstaff said the heat wave started in the jet stream and tracked toward the West coast from China, then became “locked in.”

A heat dome is sinking air that cooks the air at lower levels but this one caused high temperatures higher up, causing rapid melts in some places, she said.

The experts saw a major heat wave coming but “we didn’t expect it so early in the decade.” As for the 1000-year scenario, “climate change is already shifting the baseline.” 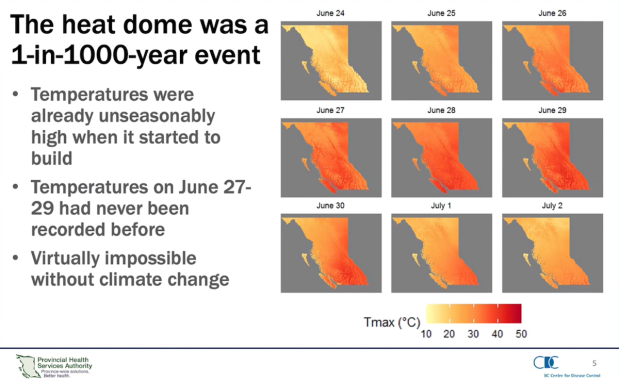