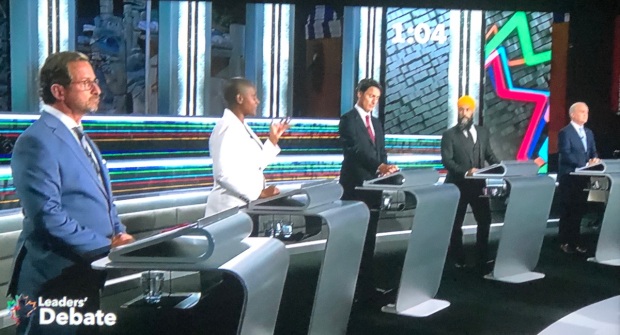 THE FACT THAT so many Canadians spent Thursday night flipping channels between the leaders’ debate and the match featuring tennis phenom Leyla Annie Fernandez at the U.S. Open in New York says something about just how committed we are to this election.

We didn’t want it in the first place and we haven’t had the time nor the opportunity to get into the nuts and bolts of it. So, we gave the debate only passing attention.

Organized by the Debate Broadcast Group, it was the first and last English-language debate of the campaign, and it was terrible — too many questioners mucking things up.

The format provided no time for the leaders to go into the issues in any depth, nor to properly rebut the often-questionable accusations and assertions of their opponents. (If I hear “there was no knock-out punch” one more time I’m going to scream.)

It wasn’t even a complete roster — People’s Party of Canada leader Maxime Bernier was excluded.

If anyone was hoping to hear  — between switching to TSN to watch Fernandez and her incredible trip to the finals — that would help decide who to vote for, the debate was of no help.