December 14, 2020 – Perhaps it was the reassurance of the first, chipper, elderly patients in Britain who spoke about their experience that has made the difference.

Perhaps, as the coronavirus pandemic casts its longest shadow onto what are already the darkest days of the year, the transition of the vaccine conversation from abstract concept to tangible reality has had an impact.

Either way, the latest data from the non-profit Angus Reid Institute indicates a notable increase in the number of Canadians who say they are willing to be immunized against COVID-19 as soon as a vaccine is available to them.

A month ago, a plurality of Canadians (40%) said they were keen to be vaccinated ASAP as opposed to wanting to wait a while first. Today, half (48%) now want an immediate jab, a boost of eight per cent.

Those 65 and over are among the most likely to say they’re eager to be immunized (61%). But while more in this country express a desire for inoculation sooner rather than later, the number of those who say they will not get a vaccine has remained static at roughly one-in-seven.

This rate varies from province to province, making the task for public health officials in some places potentially more challenging than others.

Despite recent speculation and criticism that Canada would lag behind in obtaining doses, it has turned out to be one of the first countries globally to approve the Pfizer-BioNTech vaccine. As a result, half in this country say the Trudeau government has done a “good job” securing vaccine for its citizens, while a majority express confidence in its ability to effectively manage distribution nationally (58%). 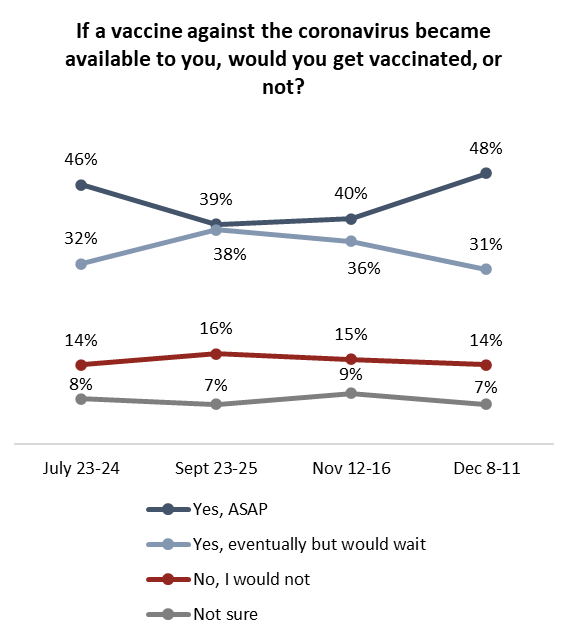 Link to the poll here: www.angusreid.org/canada-covid-vaccine-december/