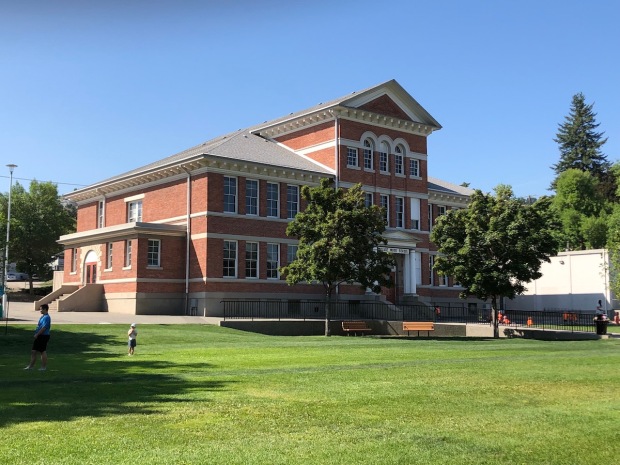 THE DOWNTOWN CORE is getting crowded. New apartment blocks are densifying the heart of the city. With 445 units in the new City Gardens proposal between Nicola and Battle Streets, there will be even more people living close by the city’s main shopping area.

Based on the usual average of 2.5 people per living unit, that could mean a lot of kids in a one-square block area.

Where will they go to school? If they were to move into a completed City Gardens today, they’d have to be bussed somewhere else.

But there’s a beautiful school just a couple of blocks away, if only our civic leaders would show some vision and common sense. It’s called Stuart Wood School.

It was closed four years ago by a school board that chickened out on the costs of restoring it and raising it to modern building-code standards.

Ever since, negotiations have been going on aimed at turning it into a museum and indigenous cultural centre. It’s an OK idea but it’s second best to what the building should be used for, which is a school.

I’ve said it before and I’ll say it again — clearly, with residential construction exploding nearby, there’s a growing need to return Stuart Wood to its intended use.

Stuart Wood is a heritage gem. Restoring and upgrading it for school use might soften the loss of 20 heritage homes that will be bulldozed to make way for City Gardens. The developers are keen community supporters and may even be interested in contributing to the costs.

So, the City and School Board need to get back together and rethink the situation and the future of Stuart Wood.

In other words, show some common sense.