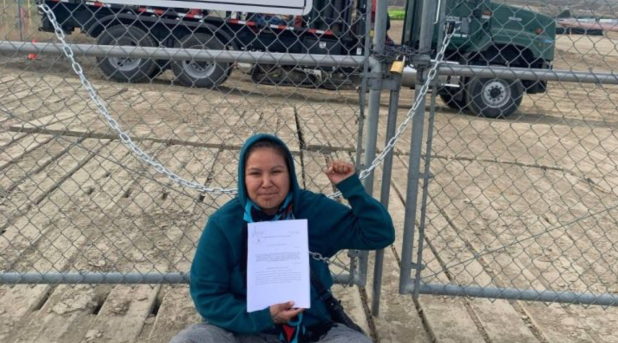 BY ALL ACCOUNTS, an anti-pipeline protest at the Kamloops airport last week went exactly the way it should. A protester chained herself to the gate at the Trans Mountain work site, was removed without incident and charged with violating an injunction.

It was an excellent case of recognition of the right to peaceful protest.

The protester was identified as part of a group calling itself the Secwepemc Woman’s Sacred Fire Council.

The strategy at protests is often to create interaction with police, video tape it and post it on social media to generate support for the cause. It’s a form of theatre. The arrest at the airport was characterized by one supporter as the RCMP “displacing and kidnapping a woman from her own territories” but it looked pretty benign — anything but a kidnapping.

The protester and police officers engaged in polite conversation before she was presented with a copy of the injunction and driven away, smiling for photos. Lorelei Dick will face a civil charge.

The whole thing lacked the drama of so many other protests, though a few F-bombs were uttered for effect. And, it provided the basis for an online petition asking for money to support the fight against the pipeline. So far it’s collected a few hundred dollars.

It also acted as a vehicle to re-iterate the schism between elected band councils who support the pipeline, and those who characterize them as “sellouts.”

The protesters describe themselves as the true “guardians, stewards and protectors” of the land, and claim to speak for the Secwepemc.

There will be a lot of this sort of thing in the coming months — it’s already happening up and down the route of the pipeline. Police handled this one well — let’s hope other protests are as peaceful and uneventful as this one.