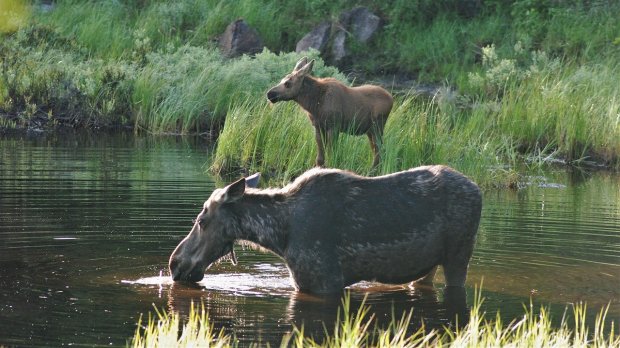 THERE IS A GROWING MOVEMENT against Premier Horgan’s plan to cull moose cows and their calves all in the name of saving endangered caribou.

It’s quite a stretch, but Horgan’s idea is to starve out the wolves by killing off baby moose and their mothers. However, biologists, ranchers and a large number of First Nations all agree that wolves are highly adaptive predators that will simply go after other prey, including caribou.

The fact is moose populations are declining all across the province. Many First Nation communities put a great deal of effort into increasing moose populations so they can once again provide a good source of sustenance.

For many years, former guide Dan Simmons has been raising awareness about the issue through his Cow Moose Sign Project. The signs draw attention to need to increase moose populations by leaving cows and their calves alone.

Gone are the days when moose were a common sight in just about every corner of the province. Yet for the past three years, the NDP have been quietly increasing the number of limited entry hunting opportunities for cow moose and calves to 357 in 2019 to 400 in 2020.

It would appear the NDP wants to quietly pass along responsibility for predator control along to average hunters. The move is designed to appease members of the minister’s own party who don’t tolerate any form of predator control to save endangered caribou.

We saw this earlier this month, when an environmental group launched a legal petition alleging the provincial government’s wolf controls to save caribou is breaking federal and provincial laws.

The Pacific Wild Alliance essentially claims the presence of wolves has no effect on declining caribou populations. However, the group doesn’t have any science to back up this claim, and is relying instead on legal technicalities.

So clearly there is some big money trying to influence what is happening in rural British Columbia and First Nation communities.

None of this would have come to the public’s attention until a leaked memo revealed the following: “It is a worthwhile trade-off to remove a few moose – a species that’s population is secure throughout the northern hemisphere – if it assists saving another species like caribou.”

First Nations are shocked because none of them were consulted about this new policy. Ranchers are concerned because a lack of predator control will directly affect their livelihoods. And hunters realize that a reduction of the moose population will mean fewer opportunities in the future.

When questioned about this new experimental policy, the minister responsible, Doug Donaldson could only point to the past when previous governments also issued tags for moose.

It is a matter of public record that governments for decades have issued moose tags, but that was at a time when moose were far more abundant. That was then, this is now.

John Horgan and the NDP have the opportunity to stop the hunt for baby moose and their mothers before the season opens in October.

Until then – government can expect public opposition to mount over an experimental policy that is universally condemned across the province.

Donna Barnett is the BC Liberal MLA for Cariboo-Chilcotin.