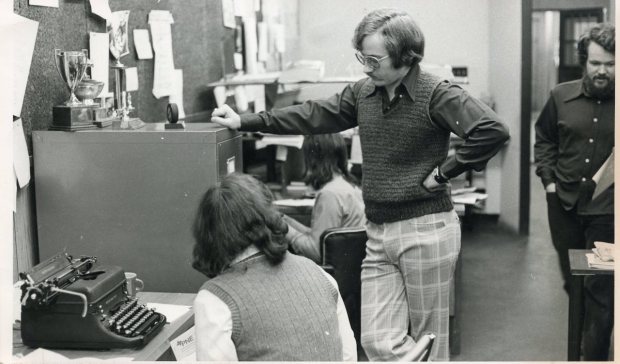 News-Advertiser newsroom in the 1970s. Typewriters and sweater vests.

THE SUMMER OF 1970 was a busy time, especially on Monday, Aug. 3. There wasn’t yet a B.C. Day stat holiday; it was the beginning of a new work week. The sky was clear, the temperature hit 32 degrees (technically, 84, since we were still not fully into metric).

The Beatles had only recently broken up even though their Let It Be album was number one on the charts. Anti-Vietnam protests raged. Midnight Cowboy had won the Oscar for best picture. The GenXers were taking over from the baby boomers.

On that day, Aug. 3, I began work at the Kamloops News-Advertiser. It published three times a week then. Fifty years ago. Five decades. Eighteen thousand, 256 days.

I was 26. I moved into a tiny house near McDonald Park, a short walk to work at the newspaper offices on Tranquille Road.