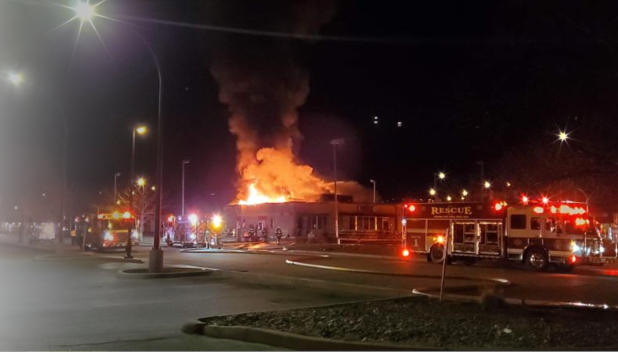 The Wendy’s Restaurant at Fortune Drive and Tranquille Road was destroyed by fire early today (April 10, 2020).

Kamloops Fire Rescue and Kamloops RCMP personnel responded just after 2:30 a.m. and closed off a large area of the Tranquille Road-Fortune Drive intersection during efforts to suppress the blaze.

Several fire trucks and 18 firefighters were on the scene. Home videos and photos show flames shooting high into the air.

An unconfirmed report said the fire started in the food processing area and moved into the dining area.

“We ask the public to avoid the area until further notice,” said Sgt. Buliziuk.

“Anyone with information regarding the fire or suspicious activity in the vicinity is requested to contact the Kamloops RCMP at (250) 828-3000.”