While the majority of adults in this country profess some belief in God or a higher power, a significant segment also wishes to see a more secular nation.

A new study from the Angus Reid Institute, in partnership with Cardus, explores elements of this push-and-pull, finding that a premium placed on freedom of religion exists alongside limitations as to how far that faith should extend in public life.

For example, while Canadians are nearly five times as likely to say that freedom of religion makes Canada a better country (62%) than a worse one (12%), they remain divided over whether the values offered by faith contribute to improving equality and human rights (42% disagree that they do). Further, while a firm majority (58%) say that a faith-based upbringing creates better citizenship characteristics, four-in-ten (42%) disagree.

Much of this division is based not on demographics like age, gender, or political persuasion, but on a mindset not immediately evident based on traditional categorizations. The Angus Reid Institute used 17 different variables to categorize Canadians across a Public Faith Index to create three groups: The Public Faith Proponents, the Uncertain and the Public Faith Opponents. Each holds a distinct mindset regarding what role faith should play in public life, and each is comprised of a diverse group of Canadians from all ages, genders and political backgrounds.

This study explores questions about the role of faith in public life as we enter the next decade, using these public faith mindsets as a guide. 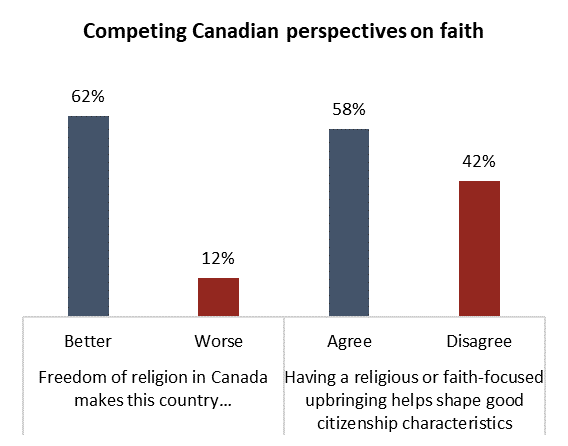