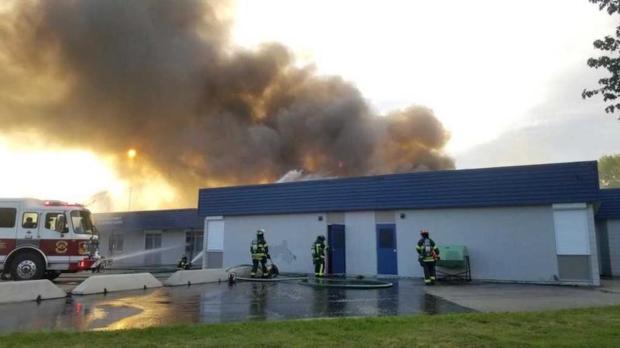 The fire that destroyed Parkcrest elementary school in Brocklehurst was not suspicious, police said today. The exact cause is still under investigation.

RCMP issued a statement saying they have determined that the Parkcrest fire was not caused by criminal activity and they have released care and control of the scene back to School District 73 and their associated insurance agents.

“A very thorough scene investigation was completed. This involved the use of heavy equipment contractors and was complimented by assistance from Kamloops Fire Rescue investigators.

“Information provided by witnesses, fire suppression crews; and a combination of physical evidence and known circumstances, led Police Fire Investigators to a ruling that the fire’s origin is not suspicious in nature” stated Sgt. Brandon Buliziuk, RCMP Fire Investigator.

“This matter is a tragedy and affects many in our community; however, we are pleased to report that this tragedy was not one caused by the intentional actions of any individual(s). We wish the children and families affected by this fire the absolute best in their likely difficult transition and adaptation to new educational circumstances.”

“The exact cause of the fire; be it mechanical / electrical etc, is still under investigation by civil authorities and corporations on their own accord.”

RCMP thanked Kamloops Fire Rescue for their assistance with the investigation, as well as residents of the Parkcrest area for their patience during loud equipment use and heavier than normal traffic.