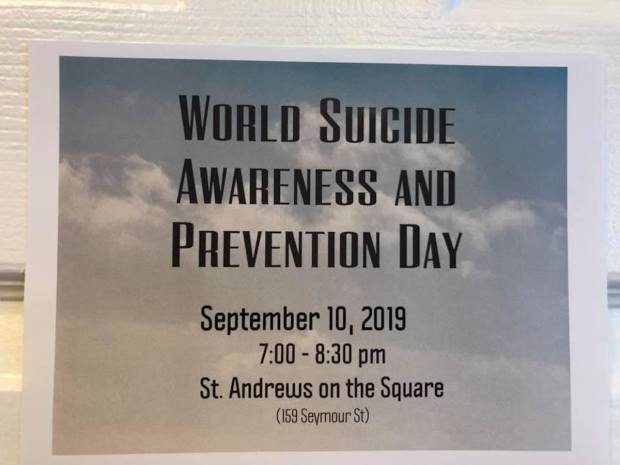 Suicide Awareness and Prevention Day will be marked Tuesday, Sept. 10 with an event at St. Andrews on the Square.

It will include a candlelight vigil, a drum performance and keynote remarks by Mel Rothenburger. Also on the program are local artists and musicians who have been affected by suicide.

The event is organized by Jolene Lindsey of C and C Resources for Life. It’s the first time in two years that Kamloops has joined other communities in marking the day. The program begins at 7 p.m. and is expected to last about an hour and a half.

It’s described as “an evening of remembrance, tribute and healing as we remember loved ones lost.” World Suicide Awareness and Prevention Day is intended to promote understanding about suicide and highlight effective prevention measures.

An estimated 10 Canadians die each day from suicide and 250 make a suicide attempt. In 2017 — the most recent year for which statistics are available — there were 572 suicides in B.C., including 130 in the Interior Health region and 17 in Kamloops. There are no age, economic, social or ethnic groups spared from these tragedies.

Coinciding with the event, CFJC Today begins a series on suicide awareness and prevention Monday, Sept. 11. Called You’re Not Alone, series segments will run each day Monday through Friday.