Sept. 3, 2019 – Whether children are reluctantly peeling themselves away from a summer of screen time, gaming and online socializing, or doubling down on the hours spent with their tablets in the name of homework, the back-to-school season brings an examination of how much is too much – and the extent to which parents are concerned by the amount of time their young children spend with these devices.

A new public opinion survey from the non-profit Angus Reid Institute, conducted in partnership with TVO, finds many parents worried about the addictive potential of digital devices as well as their contribution to physical inactivity, among other negative developmental outcomes.

While most parents (89%) acknowledge that such devices can be a valuable educational tool for young children, nearly half (46%) remain concerned that their child is spending too much time in front of a screen.

The vast majority (87%) of Canadian parents with children between the ages of two and 12 say their child spends at least one hour per day using their device(s), with most devoting significantly more time than that.

Across a number of areas ranging from physical fitness and mental health to sociability and academic performance, parents’ evaluations of their child’s well-being appear negatively correlated with their total screen time. This is particularly true of reading ability, as seven-in-ten (68%) parents of children who spend less than one hour per day in front of a screen say their child does well in this area, compared to fewer than half (44%) of parents whose children spend four hours or more. 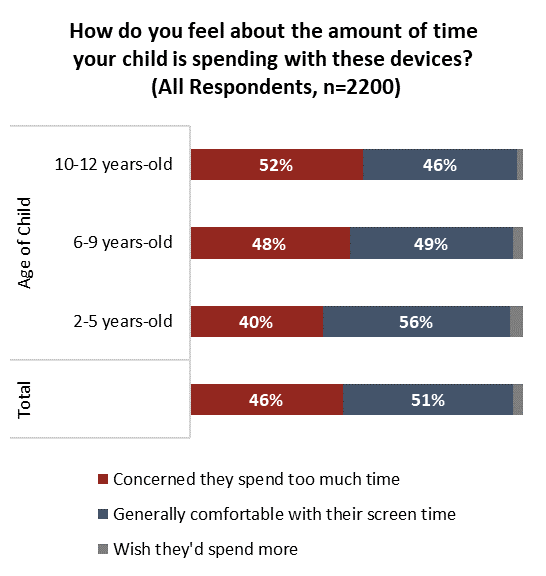