As the federal government’s Advisory Council on the Implementation of National Pharmacare calls for a universal, single-payer system for prescription drug coverage in Canada, a new report from the non-profit Angus Reid Institute – part of its ongoing series on access to and perceptions of health care among those ages 55 and older – finds a significant number of Canadians this age struggling to afford prescription medications.

The first part of this report – which focused on access to doctors and health care services – found one-in-five older Canadians (21%) facing major access issues, and a full majority having at least some trouble getting the care they need in a timely manner.

This second part of the study finds one-in-six Canadians (17%) in the 55-plus age group – a figure that represents upwards of 1.8 million people – say that they or someone else in their household have taken prescription drugs in a way other than prescribed because of cost.

One-in-ten (10%) have decided to simply not fill a prescription because it was too expensive, and a similar number (9%) have decided not to renew one for the same reason. One-in-eight (12%) have taken steps to stretch their prescriptions, such as cutting pills or skipping doses.

Some 17 per cent of Canadians 55 and older have done at least one of these things, and that proportion rises among those who have greater difficulty accessing other aspects of the health care system. 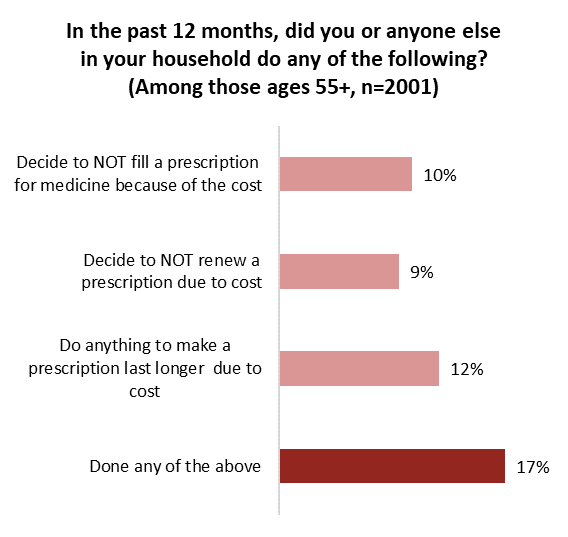