July 30, 2019 – The marathon that is the United States’ presidential campaign is off and running, well ahead of a November 2020 vote to determine the next leader of the free world.

While Democrats prepare for the second round of debates, a new study from the non-profit Angus Reid Institute finds Canadians discouraged and resigned over the prospect of the current president’s re-election. 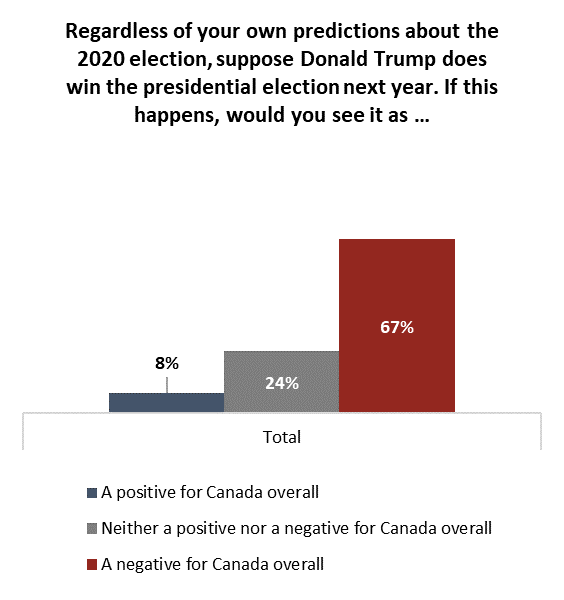 As has been the case since he took the oath of office in 2017, Canadians are overwhelmingly negative when it comes to U.S. President Donald Trump and his team at the White House. Seven-in-ten (69%) say they have an overall negative opinion of his administration’s performance since January 2017 when he assumed office, and 72 per cent say they are pessimistic about what the next year and a half will bring ahead of the 2020 election.

If, indeed, Trump is re-elected, two-thirds (67%) say it will have a negative impact on Canada, eight times more than those who say it will be positive. The two nations have engaged in tense trade negotiations since Trump’s election, while Prime Minister Trudeau has been the target of both condemnation and praise from the brash U.S. leader.