THIS WEEK’S ANNOUNCEMENT by Britain that their £50 note would bear the likeness of Alan Turing was heartening for so many reasons.

Turing was an extraordinary mathematician.  His concepts are some of the underpinning of software and computing science, upon which so much of our modern world depends.  His ideas are studied to this day around the world by budding software programmers.

Within his own lifetime, he was a key player in cracking enemy codes during World War II.

He is also remembered by many for the persecution he endured and the criminal conviction and imprisonment he received in 1952 for being gay.  He died by suicide two years later in 1954.

From helping the war effort, to standing up for his own rights, he has a place on the British £50 note.  A fitting tribute.

Two weeks earlier in the first week of July, all the Bank of Canada could do was issue a warning to people to stop defacing the $5 Laurier Canadian banknote with the likeness of Spock from Star Trek.  An announcement not quite as stirring as Britain’s news this week.

It got me thinking as to how Canada stacks up with other countries on who we depict on our money.

We do have Viola Desmond on our $10 bill, giving recognition to her fight against racial segregation in Nova Scotia in the 1950s.

Countries around the world depict a range of people on their banknotes.

For example, Denmark has a painter, a Nobel Laureate, and an author.  Czech Republic has an economist, writer and historian.  Japan has a scientist, an author, and an industrialist.  Both Denmark and Japan have monarchs, but they are not the figures on their banknotes.

New Zealand includes a Maori leader, a suffragette, and a physicist, plus one bill with Queen Elizabeth II. 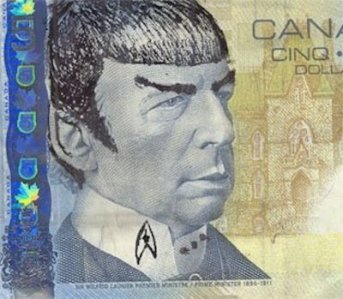 There are some countries that favor monarchs and politicians on their banknotes.  Pakistan portrays its governor general, and Mozambique depicts a previous prime minister.  All but one of Nigeria’s notes depict politicians.  Bhutan depicts past and current monarchs, as does Swaziland.

For myself, I favor the path of New Zealand and Japan, where recognition is paid to a range of achievements, rather than favoring royalty and politicians above all others.

So if we were to do away with dead politicians and monarchs on Canadian currency, who should be on our currency instead?

In the field of science and medicine there’s Alexander Bell for inventing the telephone.  Also Charles Herbert Best, and Frederick Banting who discovered insulin, or Ursula Franklin, a physicist who discovered ways of time-dating fossils, as well as being an activist for human rights.

This list is by no means complete, but more to illustrate that there are many in Canada beyond dead prime ministers and current monarchs who are worthy of recognition.

It’s clear that people have grown weary of Laurier on our $5 bill.  It’s time that the Bank of Canada boldly goes where they have not gone before. It’s time for fresh faces on our currency, not just penned in depictions of Star Wars’ Spock.

2 Comments on BEPPLE – Time for some fresh faces on our currency; who should it be?