July 12, 2019 – For many Canadians, the activities and experiences that many of us take for granted are significantly hindered by something unseen by the naked eye: persistent, ongoing pain.

A new public opinion survey from the non-profit Angus Reid Institute, in partnership with Pain BC and Mindset Social Innovation Foundation, delves deeply into the lives of those who experience ongoing pain, in order to better understand its causes, effects and potential resolutions. 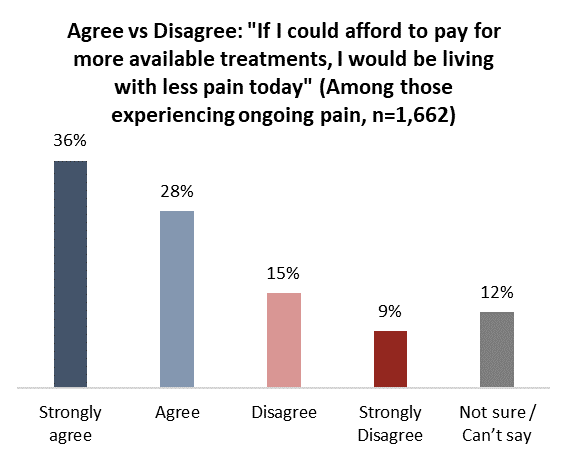 Overall, one-in-three Canadian adults (34%) say they are currently experiencing some form of pain that has lasted longer than three months. That said, for a core group of one-in-five (22%), that pain is considered significant, due to the considerable emotional and physical impact it has on their day-to-day activities. This represents millions of people within the Canadian population who are living with moderate to severe pain that interferes with their lives.

From their working lives, to sleeping habits, to personal relationships and mood, the often-invisible consequences of chronic pain are a harsh reality for many.

Consider that four-in-five Canadians experiencing significant ongoing pain (83%) say it prevents them from doing regular activities, and for more than half (57%), it contributes to anxiety and depression. Indeed, among those living with significant chronic pain, 23 per cent say they experience feelings that “life isn’t worth living.”

The importance of this issue is evident to nearly all Canadians. More than nine-in-ten say that every Canadian – regardless of income – should have access to pain treatment that works for them. This is not the current reality for many, however. Two-thirds of those experiencing ongoing pain (64%) say that if they could afford to pay for more of the available treatments offered, their discomfort and quality of life would be improved.

Canadians – whether they have personal experience of ongoing pain – are overwhelmingly supportive of proposed policy changes that could alleviate pain. Such proposals include increasing subsidies for those who cannot afford the treatments they need (89% say this would be worthwhile for government to pursue), to supporting more funding for research on effective therapies (89%), to increasing the number of treatments that are covered as a part of public health care (88%), this is an area of strong public support.

1 Comment on NATIONAL PULSE – Canadians in chronic pain speak out