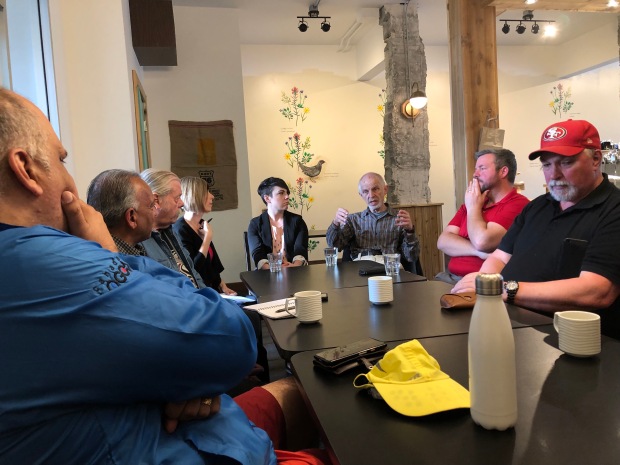 Democracy at the Moustache and Go. (Image: Mel Rothenburger)

IT’S 20 AFTER 4 on Thursday afternoon at the Moustache and Go coffee shop on Tranquille Road.

The Moustache and Go has only been open a couple of weeks and its sign consists of a piece of paper taped to the window so if you’re not careful you might wander into Overland Press next door by mistake.

Coun. Kathy Sinclair is chatting with proprietors Mitch Forgie and his wife Edna, and residents Barb Lundstrom and William Turnbull. Lundstrom has lived in the same house on the North Shore for almost 50 years and is active in the SHOP kitchen, Volunteer Kamloops and other community causes; Turnbull is a civic politics wonk who ran for mayor last October.

They’re here for the first “Ask a City Councillor” session, designed to take democracy to the people. It came about after another resident, Linda Kehoe, complained to Sinclair that voters see a lot of candidates on their doorsteps during election campaigns but never afterwards. Why not talk to people in a grassroots, informal setting?

Mel Rothenburger is a former mayor of Kamloops, former school board chair, former editor of The Kamloops Daily News, and a current director on the Thompson-Nicola Regional District board. He was awarded the Jack Webster Foundation’s lifetime achievement award in 2011. His editorials are published Monday through Thursdays, and Saturdays on CFJC Today, CFJC Midday and CFJC Evening News. Contact him at mrothenburger@armchairmayor.ca.