Politics drives sentiment among half that government was ‘too soft’ in negotiations; gave up too much

October 23, 2018 – Three weeks after the announcement that Canada, the United States and Mexico had reached a three-way trade deal to “replace” the North American Free Trade Agreement, Canadians are feeling significantly less euphoric about the pact than the government officials who negotiated it.

Indeed, the latest public opinion poll from the Angus Reid Institute reveals more say they are “disappointed” than pleased with the new agreement, a sentiment that is driven along political lines – although a significant number of past Liberal Party voters also take a negative view of the deal.

Against this backdrop, fully half are of the view that Canada’s negotiating team dealt with their American counterparts “too softly” and gave up too much to secure the pact, while just one-third feel the agreement reached was “better than nothing.”

But if Canadians are unhappy with their own leaders in these negotiations, they are similarly infuriated with the U.S. This survey finds Canadians feeling more negatively about their ally, neighbour, and largest trading partner than they have been in some 40 years. 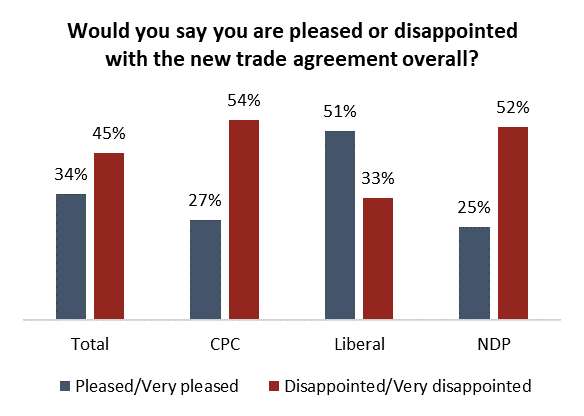 Link to the poll here: www.angusreid.org/usmca-new-nafta