Politics, rather than gender, drives differences in opinion on the issue

July 20, 2018 – Weeks of unflattering headlines and uncomfortable questions about an allegation of inappropriate touching almost two decades ago do not appear to have had significant damaging impact on Justin Trudeau’s standing in the eyes of his support base.

The issue has forced the Prime Minister to attempt to reconcile his initial denial and subsequent explanation of this alleged conduct – which took place long before he entered politics – with his current public stance supporting women who come forward with allegations of sexual harassment.

While this has led critics and observers to accuse Trudeau of hypocrisy, a new Angus Reid Institute study finds that a majority of Canadians (62%) – and, indeed, eight-in-ten women who voted for Trudeau’s Liberal Party in 2015 (83%) – say the Prime Minister’s response to these allegations has been “adequate”.

However, this leaves one-in-five past Liberal voters (21%) looking for more by way of response from Trudeau and saying their view of him has worsened in light of the incident.

Past Conservative voters are significantly more likely to be paying attention to the issue, and are twice as likely as past New Democrats and Liberals to say that their opinion of him has deteriorated as a result (58% say this).

Ultimately, Canadians offer competing views when considering allegations of inappropriate conduct. Nearly all say that men need to take responsibility for their actions toward women (91%). That said, more than six-in-ten (63%) say this specific incident is overblown and garnering too much attention. 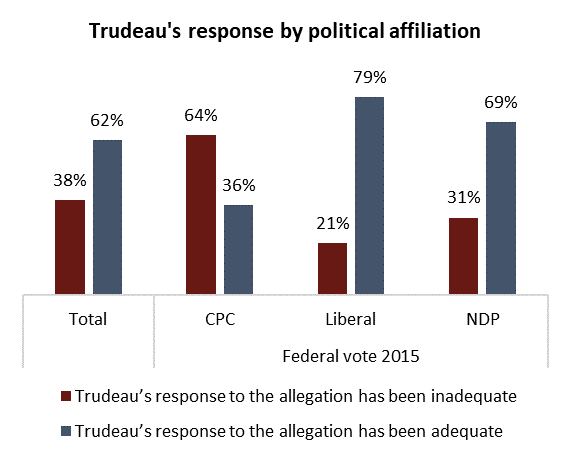 Link to the poll here: www.angusreid.org/groping-allegation-trudeau/