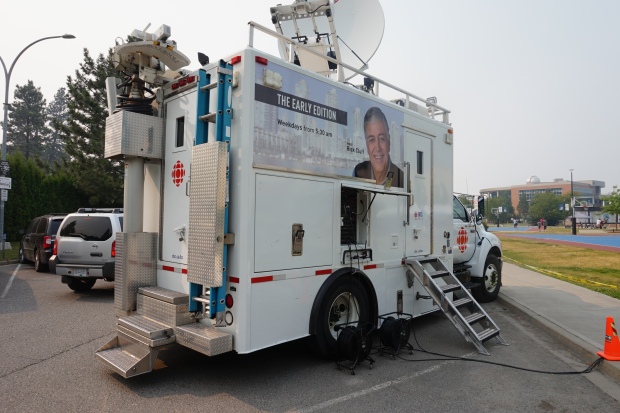 I love the CBC. This column, published in The Kamloops Daily News on Saturday, Feb. 7, 2009, was intended in the most constructive way. Honest.

REFLECTING UPON the death of CBC radio icon Russ Germain this week, I have reached the conclusion that our national broadcast corporation is ruining the English language.

Germain was like King Canute, railing against a tide of broadcasters whose goal is to mangle the Queen’s English. Besides having a perfect radio voice, he was regarded as a wordsmith and a student of grammar.

You never heard Russ Germain stumble or mispronounce a word. Compare that with a legion of other CBC radio types, led by the incomparable Anna Maria Tremonti. She hosts the morning The Current show, and wholeheartedly believes that being a good radio news host means talking as fast as ever she can.

Unfortunately, she screws up at least one word per sentence. I once emailed her on The Current’s website suggesting that if she would slow down, just a little, she might be able to read her script correctly. I didn’t get an answer.

Not that the secret to good radio work is reading slowly. Driving into work in the morning, I would be in danger of falling asleep at the wheel every time the somnambulant Mohini Singh takes to the airwaves if not for the fact I stay awake by yelling at the radio as she fumbles her way through a story.

It was worse when they let her read the whole newscast but, fortunately, she’s now restricted to occasional reports, largely scalped from this and other newspapers and rewritten.

And don’t get me started on the mispronunciation of names and place names. My “local” favourites are Osoyoos and Craigallachie — I’ve never heard CBC pronounce them the same way twice.

From Kelowna to Toronto, CBC reporters unanimously butcher Maher Arar’s first name in any number of creative ways. You wouldn’t think five little letters could cause so much confusion.

Then there’s the annoying insertion of “so” or “and” in front of every question when somebody is being interviewed. As in “So why do you think the world’s climate is changing?”

To which the interviewee inevitably begins the answer with, “Well . . .”

The two favourite words on CBC radio are “sense” (“So give us your sense of this situation?”) and “genre” (“So is this a whole new genre?”).

It’s so bad that people on the street are beginning to talk like Anna Maria Tremonti.

“So how’s it goin’?” somebody will ask an acquaintance.

“And what’s your sense of this new genre in Ottawa?”

And our kids are picking up these bad habits. A texted conversation (as we all know, teenagers don’t actually speak to one another any more) goes something like this:

“Well, not much. Listening to The Current. You?

“Same. Wanna hook up at Ruckers around 4? I scored some tokens.”

(I figured I might be able to communicate better with my son if I could crack the code, so I did a little research into teen slang on the Internet and texted him: “Sup, homie? Ripcord. Got any cheddar?” Just like Tremonti, he didn’t respond.)

But back to the CBC, I’m not saying they’re all bad. Barbara Budd and the team at As It Happens are consummate pros, despite their bad puns. Just how good Budd and Carol Off are was demonstrated recently when Robin Brown, who hosts a pretty good sports show called Inside Track, filled in on As It Happens for an evening. Poor thing must have been nervous because she could barely string two words together without a mistake.

Nobody can beat Sook-yin Lee in the quirky high-energy department, and the venerable Michael Enright has never messed up a word in his life. One of my favourites, David Grierson (who died a few years ago), had the kind of delivery that made you feel you were on a first-name basis with him. You enjoyed listening to him talk so much that, if he ever blew a word, you’d never notice.

Nora Young has the voice of an angel, and I get a kick out of Brent Bambury and Jonathan Goldstein, though technically they aren’t newshounds.

And, I admit that the CBC’s insistence on playing music only from totally unknown Canadian Celtic artists (it’s a genre, after all) is at least a change from the endless diet of pop and hurtin’ songs on regular radio.

I know only too well that somebody is going to say, “So, Rothenburger, what gives you the sense that you’re any better than the CBC?”

Well (I’ll say), nothing at all. I’ve been known to screw up once in awhile in the grammar and typo department, and people never fail to let me know when I do. The difference is you don’t have to listen to me do it.

Bottom line, my hypothesis that CBC radio is ruining our language can’t be denied — it’s a known fact that 80 per cent of illiterate people have, at some point in their lives, been exposed to CBC radio.