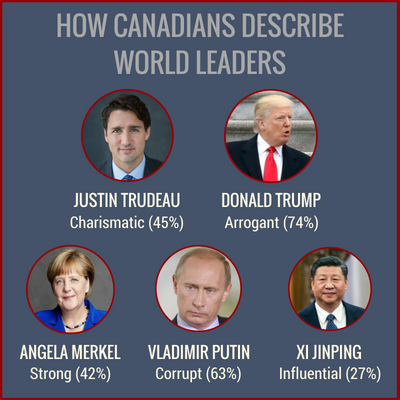 June 5, 2018 – As leaders of the G7 nations meet in Charlevoix, Quebec this week – some will no doubt have to mask their true feelings of the others. Such is the reality of diplomacy. But the Canadian public is free from any such restraint and a new public opinion poll from the Angus Reid Institute finds Canadians not holding back on what they really think of those who occupy the world stage.

While – perhaps unsurprisingly —  United States President Donald Trump provokes the most negative views – widely described as “corrupt”, “arrogant,” and a “liar” – others, such as British Prime Minister Teresa May, German Chancellor Angela Merkel, and French President Emmanuel Macron figure much more positively in the Canadian consciousness. Each is most commonly described as “strong”, “influential” or “charismatic”.

Trump is joined in the Canadian public opinion dog house by another major world leader, Russian President Vladimir Putin. Putin, kicked out of what used to be the G8 in 2014, is most commonly described as “corrupt”.

At home, Prime Minister Justin Trudeau garners a mix of positive and negative descriptors from the Canadian public that elected him. He is seen as “charismatic” and “compassionate,” but also “weak,” “arrogant,” and “bumbling.”

Link to the poll here:  http://angusreid.org/g7-summit-2018-world-leaders/