experienced sexual harassment in the workplace

February 9, 2018 – Their stories are in the news almost daily: powerful men brought low by accusations of sexual harassment from coworkers and subordinates; their accusers – often women who have suffered in silence for years – feeling empowered to speak out about past transgressions, inspired by the stories of other victims shared under the #metoo hashtag on social media.

But has #metoo permanently altered the landscape of gender relations at work? Or is it a cultural moment destined to be subsumed by the rising tide of backlash from those who argue careers are being ruined without due process? A new survey of Canadian public opinion from the Angus Reid Institute finds views on workplace sexual harassment shaped in large part by an individual’s age and gender.

Younger women tend to be among the strongest voices for change, while men in the same age group are more permissive in their views about what is and isn’t acceptable in the workplace.

Older men – who see many of those being accused in their peer group – tend to say social norms are changing too quickly, making it hard to know where to draw the line on behaviour. That said, they are also more likely to express views in line with women on a number of metrics surrounding this issue. Women, in turn, are divided on their role in avoiding harassment. Nearly all of them change their behaviour to avoid being harassed, but many resent the feeling that they have to do so.

Overall, half of women say they have been subjected to harassing behaviour in their working lives, though relatively few report such experiences taking place in the last five years. 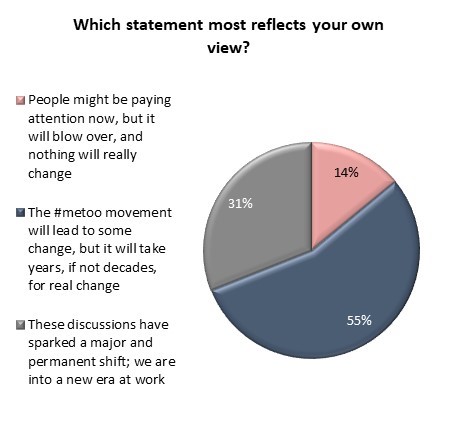 Link to the poll here: www.angusreid.org/me-too