February 7, 2018 –  The Olympic hockey tournament has been home to some of the most iconic moments in Canadian sports history. Whether it’s the lore of the Lucky Loonie and a 50-year drought-ending win from Salt Lake City in 2002, or Sidney Crosby’s Golden Goal from Vancouver in 2010, Canadians have enjoyed some great history over the two decades since the International Olympic Committee voted to allow professional athletes to compete in the games in 1998.

This year, for the first time since that decision, there will be no NHL players participating. A new Angus Reid Institute study finds most Canadians saying the competition has lost much of it’s lustre as a result of this change. Further, one-in-five hockey viewers say they’re not going to watch at all this time around.

The news isn’t all bad for Olympic broadcast partners. Four-in-ten (40%) hockey viewers say they’re just as enthusiastic for an amateur-only tournament, and interest levels for the Winter Games overall have ticked up slightly. Overall, 58 per cent of Canadians say they’ll be following the games this month. 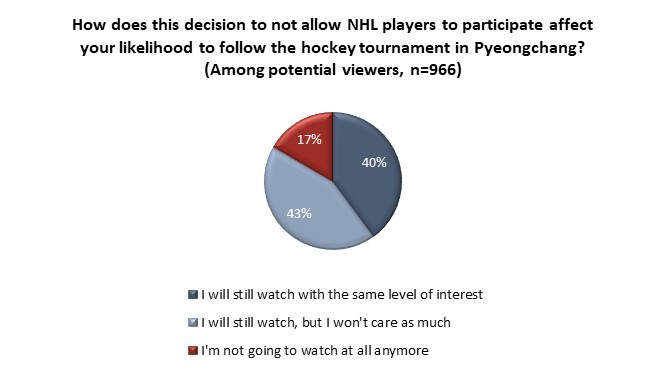 Link to the poll here: www.angusreid.org/pyeongchang-olympics-hockey-team-canada

2 Comments on NATIONAL PULSE – Passing on Pyeongchang? We want the NHL back in