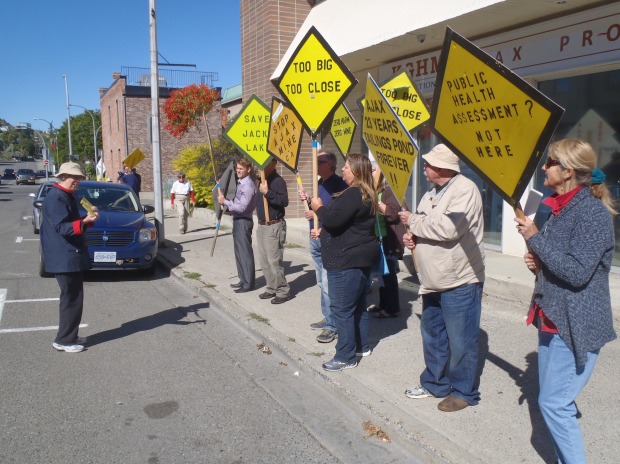 Just one of Kamloops’ many battles. (Image: Mel Rothenburger)

In 2003 Christina and I retired to Kamloops, a decision we have never regretted. We discovered very quickly however, Kamloopsians are constantly in a state of readiness. Waiting to clash with one or more of the three levels of government, each other or outside intruders. Battle lines are drawn. Out comes the placards, letters are written and rallies organized. Burma shave messaging strung along Columbia Street, bodies draping banners over the overpass at the north end of the Overlander Bridge. And of course, the obligatory visit to Council.

Upon arrival, we found ourselves very quickly in front of Desert Gardens along with our newfound friends waving placards denouncing plans by the Campbell Government to privatize the Coquihalla Highway. No sooner was that irritant put to rest and BC Hydro was in need of protection from the same government. (Kamloops Daily News Photo)

According to those who have been in Kamloops for a while this was nothing new. In 1987, taxpayers turned down (50.6%) a $50 million waterfront project for a convention centre, sports coliseum, and arts museum all in one. A year later a less grandiose referendum approved the Riverside Coliseum.

Next up were the water meters. In 2001 60% of the participants said “no” to water meters. (Council didn’t make the same mistake twice and later brought in metering without going back to the ratepayers.)

The Tournament Capital plan referendum happened about the time we arrived. The city was seeking approval to borrow $37.6 million to build sports facilities. Another close one, 54% for the “aye” side.

Not sure on all the dates or if this is a compete list but running on memory (and Google) here it goes.

2005 it was the proposed hotel at Riverside Park. The hotel was going to be built next to the Coliseum. To build required rezoning of a portion of Riverside Park. Huge meeting at the Coliseum lounge with the “yes” side headed by the Kamloops downtown business improvement association against a lose collection of ‘no’ supporters. Although in the end Council approved the rezoning Mother Nature stepped in and put a halt to the hotel. Seems the developer couldn’t sink piles deep enough to support the structure. All that misery for nothing.

2005 also gave us a “electoral reform referendum”. According the Wikipedia.

“Although the proposal failed to meet the thresholds established for the reform to be binding, the result was very close. The threshold requiring majority support in at least 60% of districts was easily met, with 97% of districts satisfying this criterion, and the overall popular vote was just 2.3% shy of the threshold.”

There was a second referendum on electoral reform in conjunction with the provincial election on May 12, 2009. The referendum was again defeated.

“Cogeneration” was the red flag in 2009. This gem was a plan by the Cogeneration Corporation to burn creosote-soaked railway ties to generate electricity.

Manitoba businessman Kim Sigurdson who was attempting to locate the plant in Kamloops didn’t feel welcome and suddenly left town. CPR and CNR are still trying to find a home for thousands of useless railway ties.

Axe the Tax was the rallying cry 2011. Former premier, Bill Vander lead the charge to repeal the Goods and Services Tax (GST). Close again with 54.73% voting to scrap the GST.

Next up was the parkade-in-the-park fiasco. This was a plan to put a 350-stall parkade next to Heritage house at a cost of eight million dollars. The Friends of Riverside Park gathered enough signatures (more than 10 000) to force a referendum on the issue. Rather than face the voters, Council quickly shelved the idea.

2011 wasn’t finished. As the parkade-in-the-park was wrapping up, the Canadian Environmental Assessment Agency began the EA process for the infamous AJAX. It wasn’t until December 2017 the plug was finally pulled on KGHM’s application.

In between times the Community had an opportunity to vote on whether to approve the city borrowing $49 million to build a performing arts centre at the old KDN site. When the dust settled, 53.7% said “no”.

As all of this has been unfolding, there have been numerous localized skirmishes such as attempts to close a small park or the Westsyde Pool. Somewhere along on line there was a scheme to collect uranium from a mining process. And of course any rezoning proposal is good for a fight.

So far the 2018 calendar only has another electoral reform referendum sometime in the fall. Likely the last breath.

No doubt there’s more but that’s all that comes to mind. How can anyone say Kamloops is boring?