WHO COULD possibly have imagined what 2017 had in store for British Columbia 12 months ago?

We were all eyewitnesses to a future political-science seminar that left 87 MLAs sitting in the B.C. legislature where they didn’t quite expect to be sitting 12 months ago. 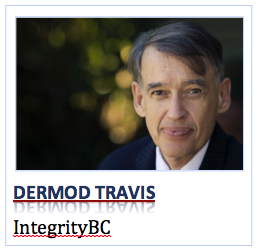 As it is every year at this time, a few New Year’s resolutions for B.C.’s political class to consider putting in their mix for 2018:

This resolution should be a no-brainer.

A few days before Christmas, the B.C. NDP posted a social-media message from Minister of Mental Health and Addictions, Judy Darcy: “Our most urgent priority is to keep people alive, so we’re dramatically increasing easy access to Naloxone.”

It is awfully nice of the NDP to do that, but they’re not actually doing it; the government is and they’re not the same thing.

Political parties in power would like to think they’re synonymous, but they’re not, something the NDP gleefully reminded the B.C. Liberals of when they were sitting on the other side of the legislature.

Which reminds me — the government’s logo came with the building. You inherited the colours and you will pass them on to the next government, not change the primary colour for an orange pantone in the meantime.

Beyond the aesthetics, it sends a bad message fresh out of the gate.

And when political appointees get a more generous golden parachute than a MLA’s transition allowance provides, perhaps it’s time to come up with some constructive approaches to reduce the cost of a change in government, rather than attacking the other side for exorbitant payments to departing appointees, knowing full well you’d do the same if elected.

2. When there’s an elephant in the room, give it a nodding acknowledgement, if only for the public record:
As the official Opposition knows well, the financial state of the Insurance Corporation of B.C. and BC Hydro isn’t pretty.

Admitting the obvious — that it was some of your choices in government that led to these messes — may not do much to improve their bottom lines, but it would be a sign of good faith by the B.C. Liberal Party and would likely be well received by the public.

The homeless, most renters and first-time home buyers would have a different view of the last 16 years.

3. Less bamboozle all around:

It’s as though some government communications staffers believe they’re acting out an episode of Mad Men. How did BC Hydro arrive at 550 “infrastructure projects between fiscal 2011 and fiscal 2015?”

Take one mega-project and divide it up among a whole bunch of mini-projects.

Work on the GM Shrum Generating Station has been divided into no less than 20 “infrastructure projects,” as BC Hydro terms them.

If you use the Alex Fraser Bridge, you’ll be happy to know that “rush hour relief is in sight.”

However, most people’s sense of “in sight” would mean soon, weeks away, maybe two or three months, not fall of 2018 at the earliest, as long as it stays “on budget and on time,” of course.

This next one doesn’t need much in the way of explanation.

The more information a government proactively releases, the more likely the public will buy in to a policy shift or, at the very least, give it a fair hearing.

As former U.S. president Abraham Lincoln is fond of saying: “Don’t believe everything you read on the internet.”

If there’s no source with a claim, take it with a grain of salt. If no source is provided when requested, it’s probably a safe bet to dismiss it altogether.

Be demanding — but diplomatic — political consumers.

Let’s make 2018 B.C.’s political literacy year and scare the bejeezus out of politicians with our collective grasp of public policy.

That’s it, five resolutions for B.C.’s politicians (and not just MLAs) and one for us to ponder.