The former Brass Kettle Restaurant at the northwest corner of Hugh Allen and Pacific Way was fully engulfed when Kamloops Fire Rescue and RCMP responded shortly after 5 p.m.

Traffic became highly congested around the restaurant as firefighters tackled the blaze and police directed traffic around it. Cause of the fire isn’t known. 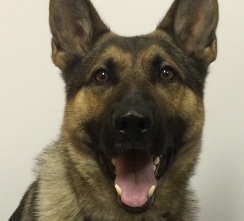 Police also dealt with a pellet pistol incident earlier in the day at the Kamloops Aboriginal Friendship Society building at 125 Palm St. RCMP responded to a 911 call at 1:44 p.m. about a man waving a handgun around and threatening people inside the building.

Staff Sgt. Edward Preto said a suspect was taken into custody a block away. Police dog Fargo found the pellet pistol, which Preto said is an exact replica of a 9mm semi automatic pistol “and it is difficult even for person familiar with firearms to identify it as such.”

The suspect is facing charges and is being held for a bail hearing Saturday.