NEWS/ POLICE — Five passengers remained in critical condition with another 10 in serious condition Thursday night after a tour bus rolled over on the Coquihalla Highway earlier in the day. 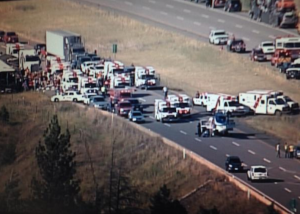 An Asian tour bus headed for the Coast with 56 passengers left the highway 30 km. south of Merritt about 2:30 p.m. IHA said 10 of the passengers were taken to Royal Inland Hospital, 22 to Kelowna General, and 11 to the Nicola Valley Hospital and Health Centre in Merritt.

It had earlier been estimated that 40 would arrive at RIH.

In addition to the five in critical condition and 10 in serious condition, 28 had non-life threatening injuries including broken bones.

All three hospitals initiated a Code Orange in response to the accident, bringing in extra staff and physicians to receive the injured. Nineteen ambulances and six helicopters were used to transport the injured.

Const. T. Dunsmore of Merritt RCMP said the name of the tour bus company had not been confirmed, but CBC News reported Thursday night that a spokesman for Richmond tour operator Super Vacation said the bus was chartered by them from another company.

The Coquihalla was closed in both directions to allow for a staging area for emergency personnel until about 4 p.m. when northbound lanes were opened.

However, 30-minute delays were still being experienced southbound at 9:40 p.m.

An update from Interior Health on conditions of the injured is scheduled for 10 a.m. Friday.