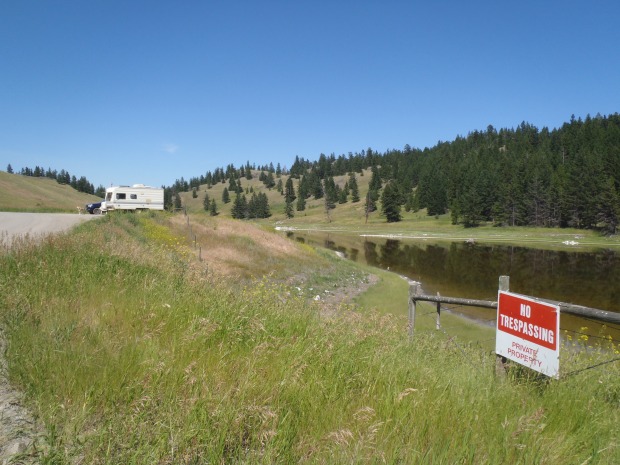 Hello Mel, I really enjoy The Armchair Mayor and look forward to it in my inbox each morning. Thank you for keeping me up to date on what’s happening in Kamloops.

I have a question for the Answer Man! Would you know why there is a security guard stationed at Goose Lake? We were out for a drive on Sunday and stopped at the end of Goose Lake for a walk. As we approached a trailer parked by the side of the lake a security guard came out and wanted to know what we were doing there.

After explaining we were just out for a walk we asked her what SHE was doing there. She told us she was there to see that no one stole any fence posts! This seemed a rather strange and stupid answer to us as the fence posts certainly didn’t look as if they were worth anyone’s while to steal plus the cost of her wages to “babysit” them everyday, cost of a porta-potty on the site, etc…

While we were talking with her another car parked close to ours and two fellows (birdwatchers, we think, as they were peering into trees and bushes using binoculars?) got out and walked in the opposite direction. She kept her eye on them as we talked and was still watching them like a hawk as we drove away. We wondered why she was really there and who was paying her wages? Might it be AJAX? Any answers?

I decided to take a run up there to see for myself and, indeed, there’s a cozy little trailer parked there for the comfort of a Ronik Security guard. The local security company has been contracted by KGHM International to keep people away from Goose Lake.

As the guard put it, they’re “watching the fence line.” That is, making sure nobody tries to cross the fence to get closer to the lake.

As you know, KGHM International has purchased several ranch properties in the area including Goose Lake. It intends to build a big tailings pond if its Ajax project is approved.

So, they’re keeping an eye on their lake 24/7 via Ronik, which provides three eight-hour shifts per day.

What was helicopter doing at Rabbit island?

There was a helicopter “measuring” Rabbit Island on Saturday, May 31. Does the Armchair Mayor know why?

Wish I could have provided a better picture (obviously Blackberry) – at $1,500 an hour it flew back and forth (east and west) over the ssland with some spectacular turns at the far west end where the “device” that was suspended was pulled parallel to the helicopter on a horizontal line:)

The Answer Man hates to admit defeat, so he won’t, but he’ll have to do a shoutout to anyone who might know the answer to this one.

I started some weeks ago by focusing on who owns Rabbit Island, since it seemed logical the owner would know what was going on. Turns out the City does not own the island, and neither does Domtar, but I was directed to Weyerhaeuser, whose communications officer Wayne Roznowsky informed me the company wasn’t involved in any helicopter activity on the date you mentioned.

He suggested it might have had something to do with a movie being shot in Kamloops at the time, since word on the street was the production company was storing equipment in the City’s former public works yard just across from Rabbit Island.

Indeed, that was confirmed to be the case. The old works yard also happens to have an out-of-use helicopter landing pad, which would have proven handy if you had aerial photography equipment stored on site. Was the movie company testing out its equipment on that day?

Thompson-Nicola Film Commissioner Vicci Weller didn’t know if any filming or related activity was going on there, but she gave me a number for the production company in Vancouver. When I phoned the office, I was directed to public relations officer “Gloria.”

After talking to her twice and explaining the issue twice by email as well, Answer Man has hit a dead end. No answers appear forthcoming from Gloria.

So, if anyone out there knows why that helicopter might have been buzzing around Rabbit Island, please let us know. Rest assured, Answer Man will keep this file open.

Got a question for the Answer Man? Send it to armchairmayor.ca.

5 Comments on Answer Man — why is Goose Lake under guard?