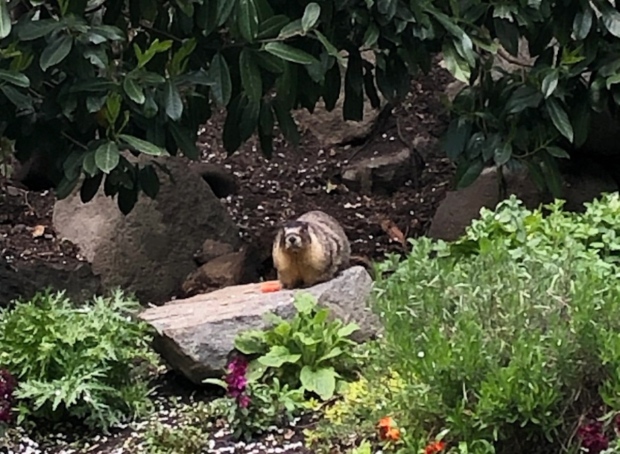 HERE’S IRONY: The loneliest guy in Victoria is emerging from isolation just as the rest of us go in.

We speak, of course, of Roger, the marmot, who lives on the grounds of the Empress Hotel.

Roger managed to wake up from hibernation precisely as the city was shutting down. Frankly, it was a bit surprising that he ambled out of his grotto at all. Nobody knows how old Roger is, but he has been leading the bachelor life at the hotel since 2008, which means he’s getting long in the tooth, marmot-wise.

He has lasted this far, though. “He seems quite spry,” said Victoria’s Diane Knowles, who works in the area and posted pictures after an accommodating Roger struck a pose the other day.

But jeez, what has to be going through the little guy’s mind? When he tucked himself in for his long winter’s nap, he couldn’t have dreamed of the world to which he would awake: barricades across the driveway of the shuttered hotel, no Inner Harbour tourists, no constant hum of Government Street traffic.

The hives of his neighbours, the honeybees, have yet to arrive for the season. Poor Roger (he’s named after former Empress general manager Roger Soane, BTW) can’t even go to a Royals game to see his marmot pal Marty.

This bewildering new reality will likely deepen Victorians’ fondness for Roger, whose solitary existence already makes him a subject of sympathy. You see, he didn’t choose to be a loner.

It’s just that as a yellow-bellied marmot — which sounds like something Yosemite Sam would call Bugs Bunny, but is actually a species not normally found on Vancouver Island — he’s as rare as a Humvee in the mayor’s parking spot.

His predicament didn’t dawn on us immediately. When he first showed up in town, having presumably hitched a ride from the mainland on a transport truck, we freaked out as though he had just walked in with a dry cough, fever and unwashed paws.

Politicians, conjuring up the spectre of an invasive species colonizing the Island, vowed to trap and deport him (or at least slap him with the speculation tax). It took at least four failed attempts to capture Roger before someone thought to ask how, with no other yellow-bellies to mate with, he was supposed to breed and colonize.

After that, we not only let him be, but lavished him with the kind of affection given beloved figures we know won’t be with us much longer. (Think of the Queen Mother without the hat, and with a nibbled carrot substituting for the gin.)

Now, not to pooh-pooh this attachment, or to say the warm fuzzies are misplaced, but it must be pointed out that while Roger himself is alone, he does not actually belong to an endangered species. Yellow-bellied marmots are like pipeline supporters: There might only be one in downtown Victoria, but there are a gazillion in Alberta and the B.C. Interior.

Meanwhile, right in our backyard — albeit out of sight in hard-to-get-to places — our very own Vancouver Island marmots continue their struggle to survive.

And, to make things worse, those who are fighting to save them have pandemic worries that go beyond Roger’s social-isolation woes.

“There are two primary concerns with COVID-19 and Vancouver Island marmots,” says Adam Taylor, the executive director of the Nanaimo-based Marmot Recovery Foundation.

“The first is the chance that the marmots themselves are susceptible to COVID-19, and the second is the impact on the foundation’s ability to deliver recovery efforts that the fragile Vancouver Island marmot population needs.”

Now, while there’s no particular reason to believe the disease could make the jump (though did you see the story about the Bronx Zoo tiger that tested positive?), Taylor worries that if it were to do so the Vancouver Island marmot’s lack of genetic diversity could leave it defenceless.

He’s also trying to work through the logistics of sending marmot-recovery teams (the dangers of working in the wild mean at least two people are needed) into remote places while observing anti-COVID measures.

The Vancouver Island marmot is in better shape than it was 20 years ago, when just 30 animals existed in the wild. Last year, the count topped 200, a jump of 17 per cent in two years.

“That’s still one of the most-endangered animals on the planet,” Taylor says. “It’s still a precarious population.”

Researchers will have a clearer picture as the marmots, spread over 20 or so colonies around the Island, come out of hibernation in the next three weeks. No word on how they’ll persuade the animals to stand more than two metres apart.

As for plucky little Roger, let’s hope he, too, stays safe as, like the rest of us, he awakens to a strange, changed world.