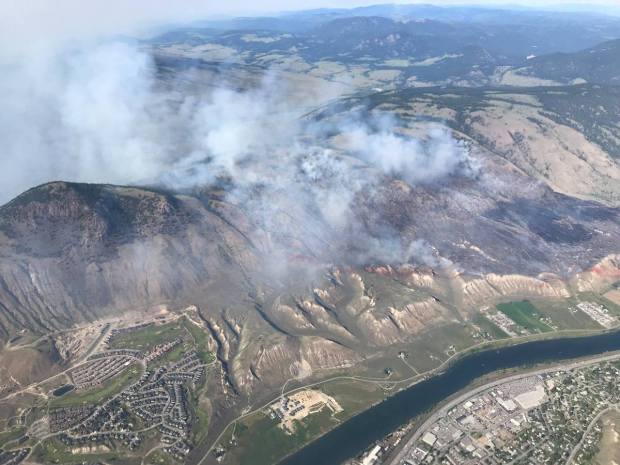 Firefighters will spend the night working on a 380-hectare grass fire in the hills above East Shuswap Road on Tk’emlups te Secwépemc, with high temperatures and strong winds forecast for Friday.

Despite concern about the forecast, the fire was reported by TteS as slowing down. It was first reported around lunch time today (July 12, 2018) and quickly grew as air tankers, helicopters and firefighters tried all afternoon to bring it under control. Kamloops Fire Rescue assisted BC Wildfire crews.

By evening, fire activity was reported to be dying down as crews worked on the northern flank and as the fire pushed up the slope, where it slowed down on the plateaus.

Water skimming aircraft used Paul Lake for their refills. No structures have been damaged, and residents of six homes temporarily evacuated were allowed to return later in the day. East Shuswap Road was re-opened to traffic.

Fifty-seven firefighting personnel and four pieces of heavy equipment were battling the fire during the day, with 28 firefighters to continue overnight with containment efforts.