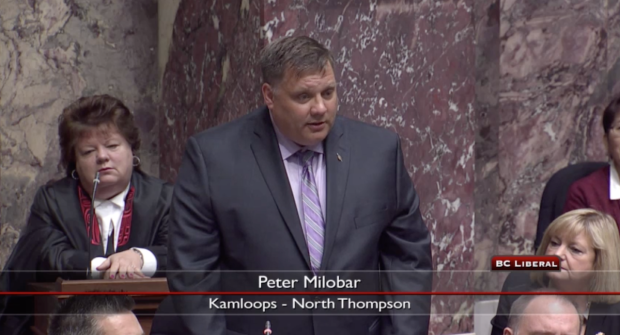 P. Milobar: Last week, we heard about the Minister of Agriculture writing an intimidating letter to a law-abiding business in British Columbia. Now we learn that the public servants are her next target.

Dr. Gary Marty is the provincial fish pathologist for the Animal Health Centre in the Ministry of Agriculture. This is an accomplished public servant with a doctorate in veterinary medicine. But there is a problem. Those opposed to fish farms don’t like the research Dr. Marty has done, and as a result want him fired. Incredibly, the minister’s response has been to launch an investigation of Dr. Marty.

Will the minister table the terms of reference for her intimidation investigation of this respected public servant?

Hon. L. Popham: Thank you for the question, and I’m happy to address this. Our government is committed to evidence-based decision-making, and we’re working hard to restore the public’s faith in our science.

In April, a survey of 403 government scientists of B.C. found that 71 percent said that B.C. Liberal cuts to science negatively affected their ability to do their jobs. The information that we provide to DFO fish health audit program — it needs to be based on science.

And when DFO raises concerns, we take them seriously. We are verifying research produced by our Animal Health Centre to ensure that we’re making decisions based on science.

Mr. Speaker: Member for Kamloops–North Thompson on a supplemental.

P. Milobar: Let’s be clear. Dr. Marty is being attacked for scientific research done for the people of British Columbia. This is an individual who has completed research at UC Davis and is on the faculty list for the American College of Veterinary Pathologists. And now, not only is his job being threatened as a result but the minister this scientist reports to has confirmed to the media that she has launched an investigation — not an investigation into the threats, not an investigation into those trying to silence Dr. Marty, but into Dr. Marty and his research.

Can the minister tell the thousands of public servants in British Columbia that work in the public interest if they too will be investigated if the government doesn’t like what they have to say?

Hon. L. Popham: Let’s be clear about what happened over the last 16 years. I think it’s very important to understand the situation we’re in. The B.C. Liberals reduced the number of government scientists by 25 percent and cut the resources….

Mr. Speaker: Members. Members, we shall hear the response. Thank you. Members.

Hon. L. Popham: And this former government reduced the resources available to the scientists that remained. After 16 years, public trust in government research was at an all-time low because of the B.C. Liberals.

When DFO raises concerns about our research, we take it very seriously. We’re making sure that we are making decisions based on science, so we are looking into this and taking it seriously.

Mr. Speaker: Member for Kamloops–North Thompson on a second supplemental.

P. Milobar: It’s unfortunate the minister is trying to deflect away that the questions are really around her own actions and the actions that she is undertaking as a minister. The minister can try to deny the facts, but clearly, she doesn’t like Dr. Marty’s research and is shopping around for another opinion.

Last week, the minister confirmed to Randy Shore of the Vancouver Sun that she had launched an intimidation investigation. She told the reporter that Dr. Marty’s research was being investigated at the request of groups opposed to what his research had shown. This government doesn’t like the independent advice given by Dr. Marty, because it doesn’t fit their narrative. The minister doesn’t like the expert advice from independent public servants, so she is trying to silence them.

To the minister. Dr. Marty is a respected public servant whose work is done on behalf of British Columbians. Will she stand up and defend him and his findings on fish farming instead of trying to intimidate those she disagrees with?

Hon. L. Popham: Let me be clear to the member opposite. Not one individual is under investigation.

J. Martin: We should be clear here. It is the Minister of Agriculture who is stoking fear among ranchers, guide-outfitters, fish farm operators and anyone else who relies on the certainty of tenures, leases and the use of Crown lands. It is she who is writing eviction notices. It’s not her deputy. It’s not her ADM.

It’s not a statutory decision–maker. It is her.

Can the minister tell the House what other independent scientists in her ministry will be under review because she doesn’t like their research?

Hon. L. Popham: I’d like to reiterate there is no individual in the lab at the Ministry of Agriculture that is under investigation. But when DFO raises concerns about our research, we take it seriously, as any lab who believes in integrity would.

Mr. Speaker: Member for Chilliwack on a supplemental.

J. Martin: Perhaps back during the writ period, instead of a Better B.C., a more apt slogan for the NDP might have been The Bullying Starts Here.

Some individuals opposed to fish farming want a government scientist fired for doing his job — a respected public servant, well respected in the field. The minister — instead of defending the scientist, paid to provide her with unbiased research — confirmed to a reporter this past weekend that she launched an intimidation investigation into his research.

Why is she launching intimidations into independent advice given to her by expert scientists? Is it because she has made up her mind on the issue and only wants evidence that will fit that narrative?

Hon. L. Popham: I’ll repeat to the member that nobody is being fired. Our lab is very interested in integrity. I am proud of our lab, and the lab is working with DFO to make sure that our results have integrity. That’s what’s based on science.

Let me remind the member that back in 2015, the former government put tenure process up for review.

2 Comments on IN THE LEDGE – What are terms of govt’s intimidation investigation?