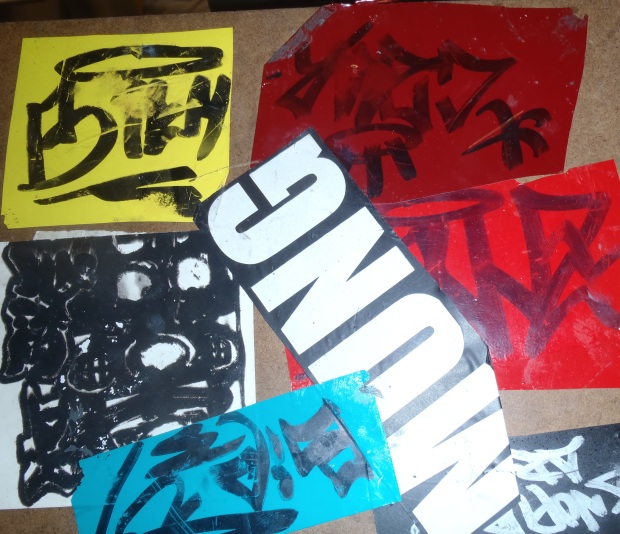 NEWS — Like hackers who eternally search for new ways to get around Internet security, graffiti vandals look for ways to thwart the cleanup of the tags they leave on public and private property.

They buy the material such as adhesive vinyl from craft stores or construction tape from home renovation outlets, pre-tag the pieces with marking pens or using a computer printer, and cover a lot more targets in a single night than they were ever able to do by painting them individually. Sort of like Internet spam. And the speed with which they can do it makes it tougher to apprehend them.

It’s also called sticker art, sticker slapping or sticker bombing. While walls, fences and other “canvasses” can be cleaned up with special paint removers, or painted over, the slap-ons are hard to get off, especially if glued. Bouvier said removal can damage the surface underneath, even if it’s metal.

Graffiti vandals sometimes trade stickers and slap on the stickers of other vandals along with their own.

“These are on absolutely everything and anything,” she told today’s (Monday’s) meeting of the City’s Coordinated Enforcement Task Force.

Nevertheless, the task force continues the battle, teaming up with other groups like Smart Options, Beattie School of the Arts and the downtown CAP Team, who help keep on top of graffiti removal and cover-up.

“Slapping up paint every day is not going to do it,” Bouvier said of the need to take a co-operative approach.